As this spring I will have a lot of fieldwork at work and won't be able to do a real spring trip and my partner  had some days overtime of 2015 at her work she had to take before the end of February 2016 we decided to do a very early trip and visit 2 of the 7 Canary islands at the end of February. We left at the 18th arriving late afternoon in Tenerife and returned at the 28th.

Before heading to the observations made first some background information on the Canary islands in order to better understand what butterflies are present and why they are present at the Canary islands.
The Canary islands are part of what is called the Macaronesian (biogeographical) region, these are the volcanic islands in the Atlantic ocean and apart from the Canary islands comprise of the other archipelagos the Azores and Madeira. The fact that these islands arose through volcanic activity means they were never connected to the mainland of Europe or Africa, unlike other European islands like the British Isles or Corsica. Because of this the butterfly fauna is rather poor. The oldest Canary islands, the eastern Lanzarote and Fuerteventura, were formed some 20 million years ago and gradually through time the more western islands appeared with El Hierro the latest to form some 750.000 years ago. This long period of time however means that butterflies that could reach the islands in an early state would get isolated from populations of the mainland and could evolve in different ways than their relatives on the mainland from their common ancestor. And this is exactly what happened meaning that from the 40 butterfly taxa that have ever been seen on the Canary islands 16 taxa are endemic to one or more of the Canary islands or to bigger parts of Macaronesia.

Species in green are species I could observe during our stay

(1) There are unconfirmed sightings of Gran Canaria, possibly this concerns accidental import with the secondary larval foodplant Tropaeolum majus. The species was considered extinct on La Gomera as there were no confirmed sightings since the mid seventies but recently a small population was found on the very northern tip of the island (see http://pyrgus.de/Pieris_cheiranthi_en.html). It is unclear to me if this is a long overlooked population or maybe this also concerns accidental (re)import. There are some other unconfirmed sightings from the N of the island.
(2) migrant or accidental import via agricultural activities
(3) recent genetic research splits up the 3 green-striped whites as distinct species, this is already recognised as such by Fauna Europaea (FE)
(4) According to some studies also the Canary cleopatras constitute different species, according to other they don't even deserve the status of subspecies. I chose the middle road in following FE and considering them here as one species but give credit to the subspecies.
(5) Only known from the late 19th century, voucher specimens are present from one collector only. Maybe the status of this species should be re-evaluated. It wouldn't be the first case of intentional or unintentional mistakes in museum specimens.
(6) Recent studies show P. icarus consists of 2 species with P. celina being a southern counterpart of the European P. icarus. I follow FE here but mention celina as to make clear what population is present on the islands
(7) There are several unconfirmed sightings of P. icarus (celina) on other islands but to my knowledge no populations exist on the western islands

The 2 eastern islands are the oldest without any real mountains (mostly below 800m) and are close to the African coast making those the driest islands with lots of steppe to dessert like habitat. The 4 westernmost islands (from E to W: Tenerife, La Gomera, La Palma and El Hierro) are more mountainous with the Teide mountain on Tenerife reaching up to 3700m, constituting the highest mountain of Spain, higher than the Pyrenees or Sierra Nevada. 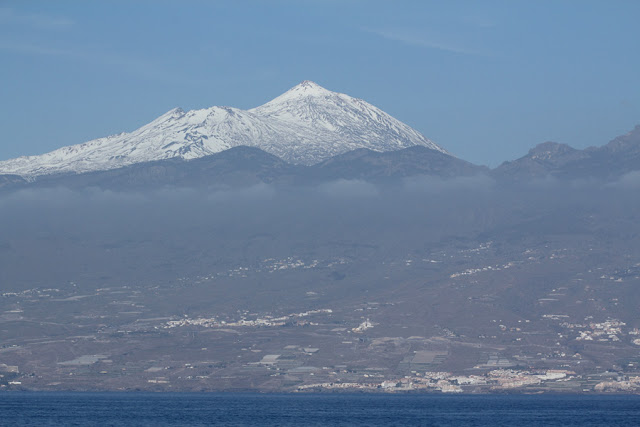 Mount Teide as viewed from the La Gomera - Tenerife ferry

Because of their western position this mountainous areas catch up a lot of humid from the northern trade winds in that part of the ocean. This creates a habitat unique in Europe of humid laurel forests on the north side of these islands from more or less 800m to 1500m. More about this in the species accounts. 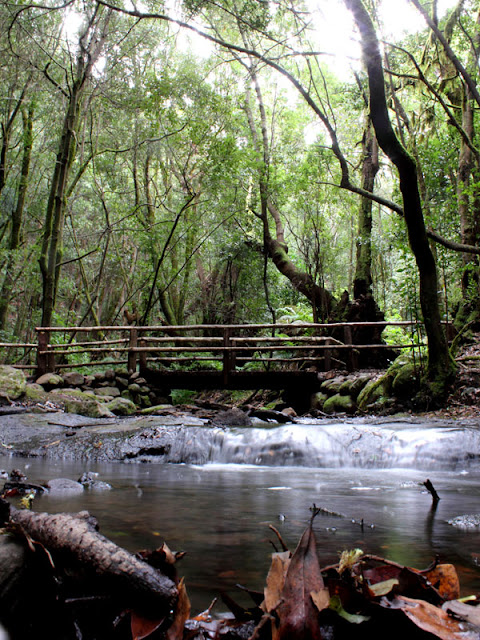 This also means that the southern sides of the islands are considerably drier than the northern sides (in Tenerife the driest locations get less than 100mm rain per year, the wettest locations get more than 1000mm rain per year), creating a high diversity in habitats on a small area.
In between these eastern and western islands is Gran Canaria, an island where also habitats form a transition between eastern and western islands. There used to be some laurel forest on Gran Canaria too but due to human activities most of it (>95%) disappeared.

For everyone wanting to visit the Canary islands for butterfly watching I recommend reading the 1995 paper by Martin Wiemers, a little out-dated (for example Leptotes pirithous is only since recent times part of the Canarian butterfly fauna) but still very informative.

Species accounts of the most important species I saw during my February trip will follow in a next part. 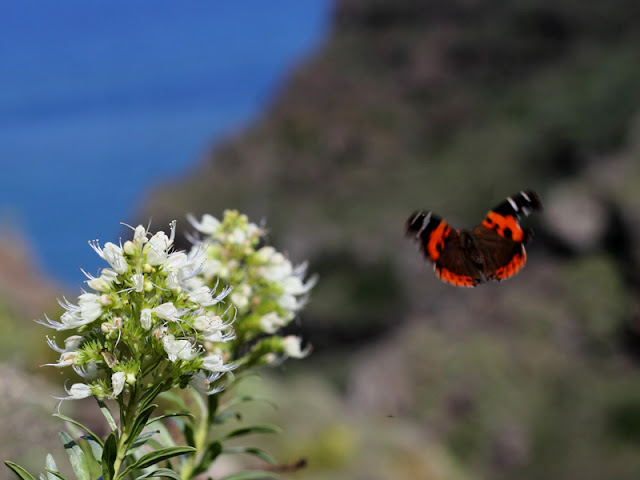 Posted by Pieter Vantieghem at 15:18