This is another endemic with a peculiar story. This species is only present on the Canaries and on Madeira and is a specialist of the local nettle species (mostly Urtica morifolia but also other Urtica species) that grow at the borders and open places of the laurel forest. The butterfly itself is a very good flyer and can be found all over the islands, even on the dry - eastern - Canary islands but for reproduction apparently largely depends on the laurasilva zone. The strange thing about this species is that its nearest relative is not our European red admiral Vanessa atalanta but the Indian red admiral Vanessa indica living in the eastern palearctic from NW-India to the east. Vanessa vulcania has long been considered a subspecies of Vanessa indica but nowadays mostly is considered a species on its own, for example on differences in the larval stages (see f.e. this article). The hypothesis is that during the Pliocene (some 2 to 5 million years ago) climate was more humid around what later became the Mediterranean area creating a habitat suitable for laurel forests so probably the common ancestor had one large distribution from the west of N-Africa to the eastern palearctic. The ice ages following this warmer period and the subsequent forming of N-African and W-Asian deserts made the distribution to split up and so it became possible for both taxa known today to evolve separately. 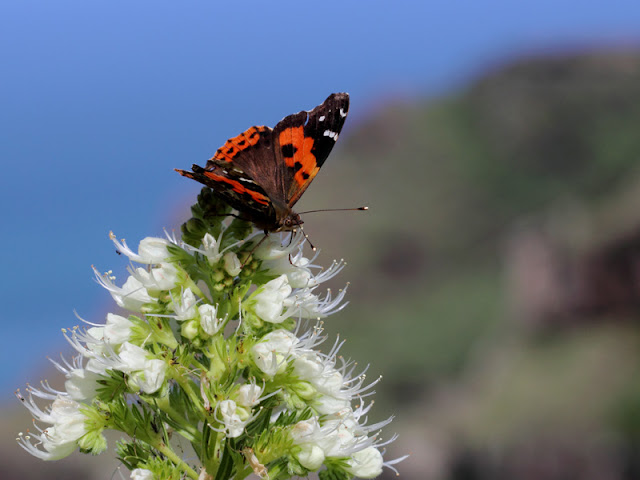 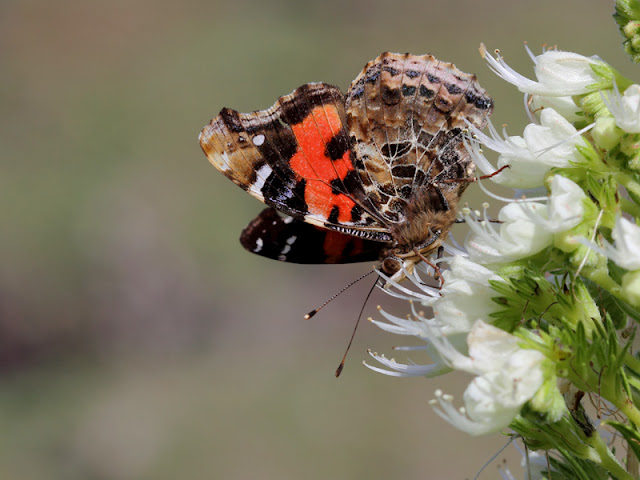 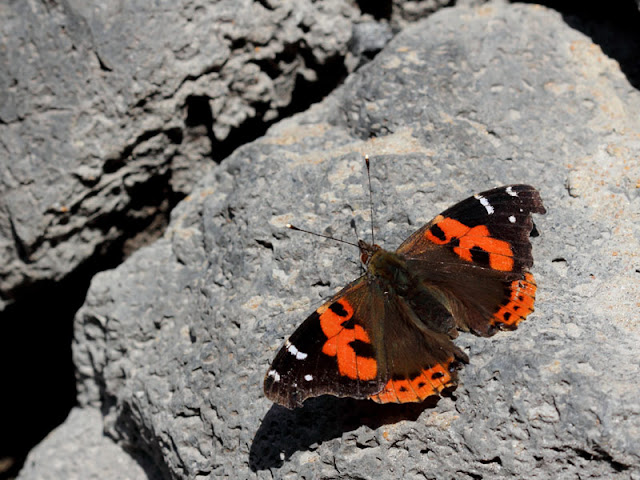 I found the species to be common and adults - as strong flyers - can be seen almost everywhere. Most specimens were damaged in some way so probably most winter as adult.

This is a nearctic species mainly occuring in central America and migrating north into north America in spring and summer. In Europe it can be found in the west of the Iberian peninsula and on the Canary islands and Madeira. I couldn't find back when the first observation were done in the Canaries but apparently it was widespread in at least Tenerife until it seemed to have disappeared in the 1970's with no observations until the early 1990's. Hence the statement in some field guides the species was extinct in the Canary islands. However since halfway the nineties more observations have followed.
Unlike the statement in the Wiemers article on the butterflies of the Canaries the larval foodplants used are not nettles but herbaceous plants with in some kind rather velvety leaves like Gnaphalium luteo-album or Filago gallica (I checked some Filago-like plants on La Gomera but didn't find caterpillars). For this reason this species is most likely best to be found in open landscapes like abandoned fields or scarcely grown hillsides. Kinds of landscapes that some naturalists don't visit while being at the Canary islands as these or not the most typical Canarian landscapes. Maybe this is the reason the species sometimes seems to disappear for years... The adults however are strong flyers so can be seen at more urban locations as well. This is what happened to us. We were planning to visit Mt. Teide from the north side from our base at La Orotava. On the way however we saw road signs indicating the road to be closed due to snowfall the previous day. To check this with some local folks we parked along the way and in some small roadside park I saw a flowering hedge attracting lots of Nymphalids. The first one I got a decent look at was one of 2 American painted ladies! Later on we saw a third individual on La Gomera in the valley where we had the Gomera cleopatras. 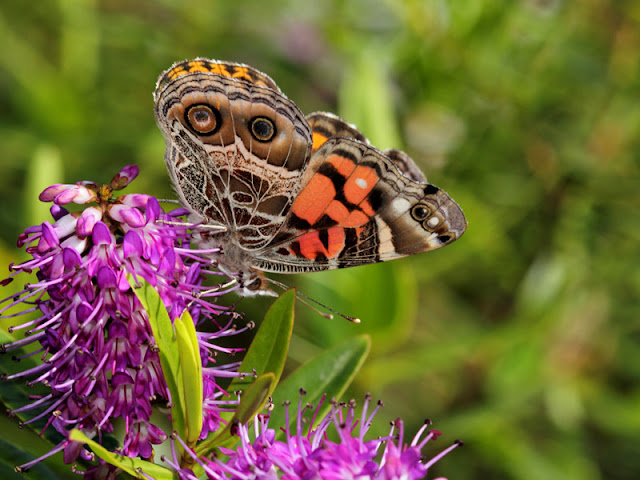 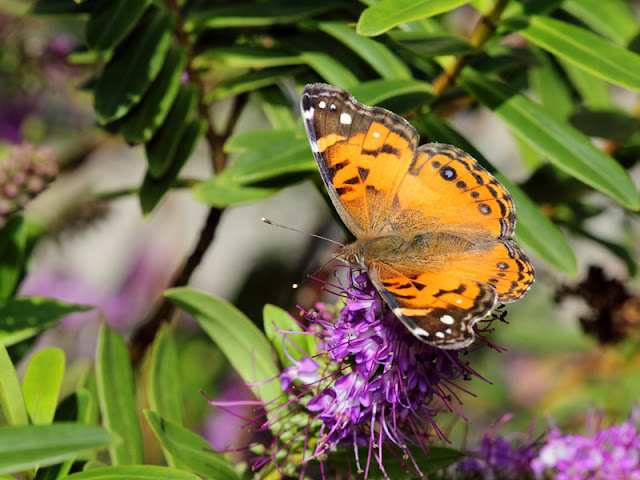 Another Nearctic migratory species. The Monarch is probably the best known migratory butterfly in the world. It is already known from the Canary islands since the 1880's. It is easy to find in some urban parks where the larval foodplants are used (Asclepias and Gomphocarpus species). Although I searched all possible larval foodplants in the botanical garden of La Orotava I could only find adults (at least 5). In la Gomera I saw singletons in Vallehermoso, Agulo and San Sebastian. 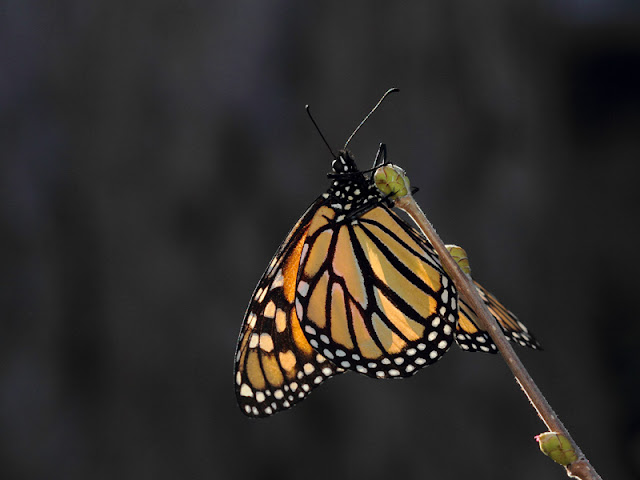 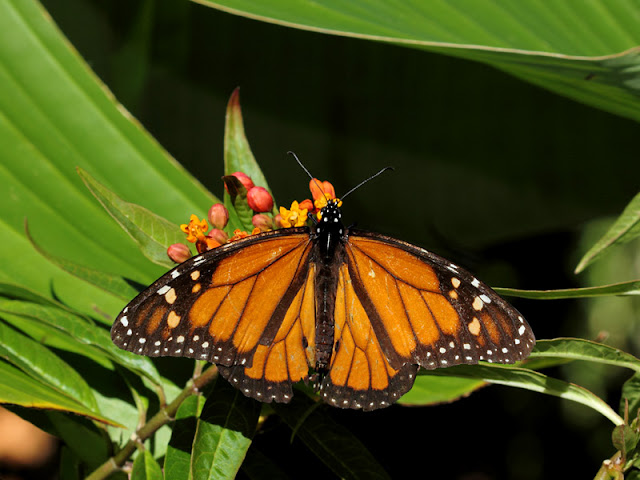 
I've been on the lookout for its African relative Danaus chrysippus but unfortunately didn't observe that species. It seems to be more local on the western Canary islands than its big brother occurring mainly in rather dry coastal barrancos. A good region seems to be the barrancos to the east of Punta del Hidalgo but unfortunately when we visited that location Tenerife was still in the middle of the depression at the beginning of our stay.
Red Admiral Vanessa atalanta we saw regularly at different locations but in smaller numbers than Vanessa vulcania.
Another remarkable Nymphalid observation was the fact that when we returned from La Gomera suddenly we saw Vanessa cardui all over with the species in numbers at every sunny open location we stopped, some just sunning and behaving territorial, others just flying by in N to W direction. 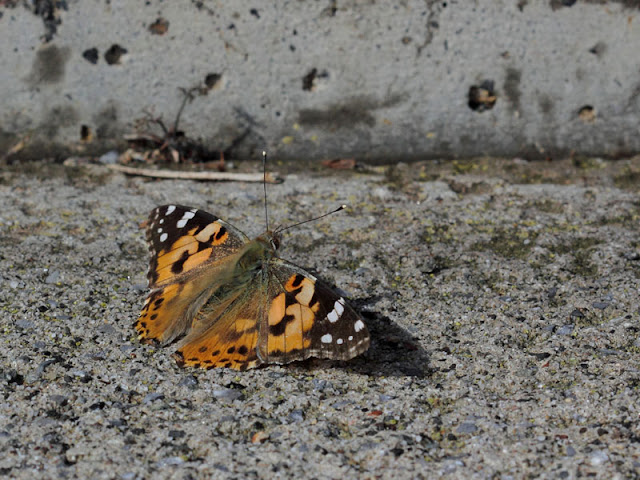 Posted by Pieter Vantieghem at 21:07