Cacyreus marshalli
This originally southern African species is well spread in the Canaries, mainly around buildings where the larval foodplant Pellargonium grows, but it can be found in more natural environment ass well. This species was accidentally introduced to the Balearics in the late 1980's and has since then spread all over the Mediterranean area. Nowadays it can be found from the Canary islands in the west to Turkey in the east. 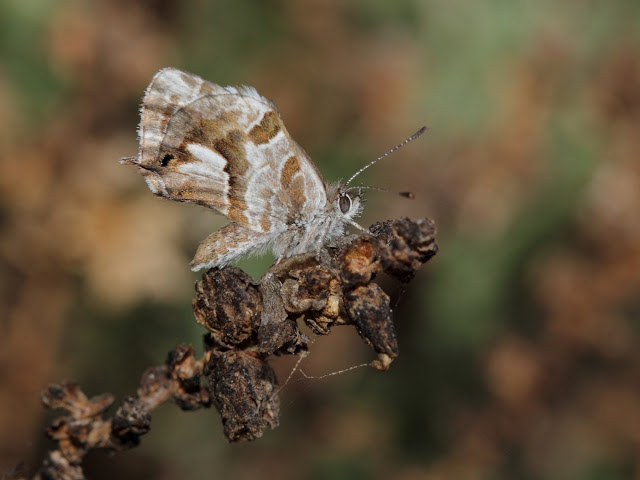 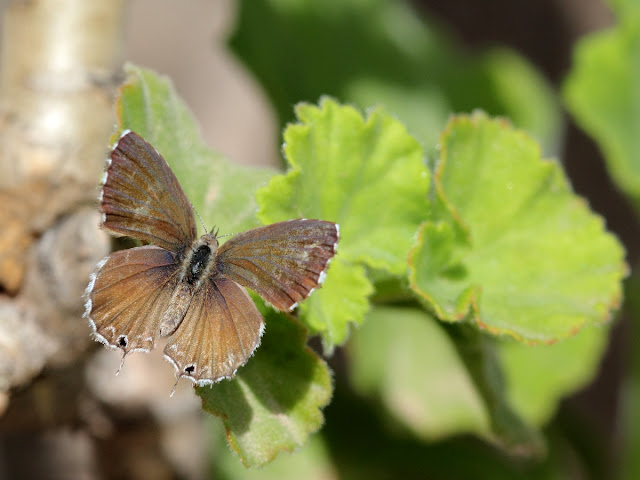 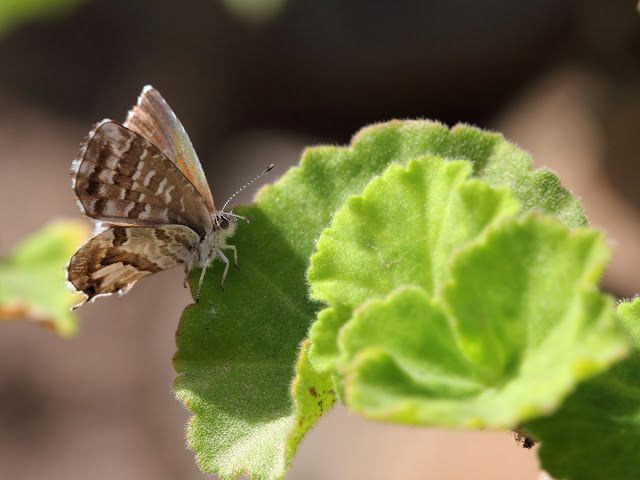 Cyclyrius webbianus
This species is an endemic of the 5 westernmost Canary islands so it can be found on Gran Canaria but not on Fuerteventura/Lanzarote. The species is not uncommon in natural environments in Gran Canaria although numbers are rather low in winter. More information on this species in the post from last year. 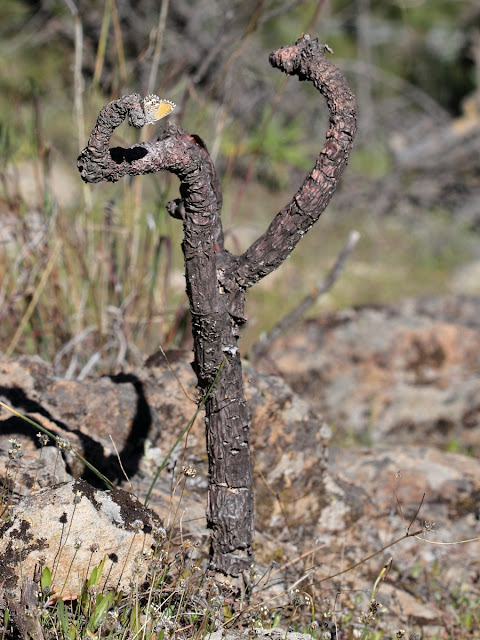 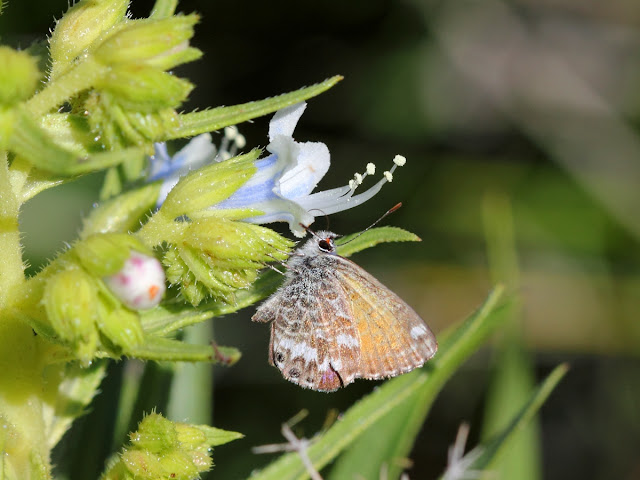 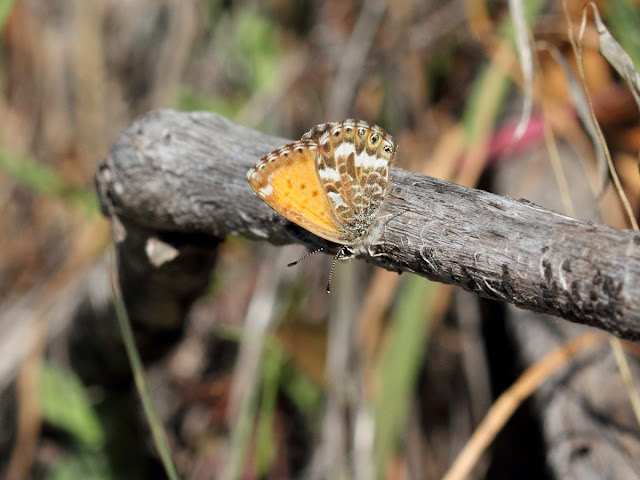 Lampides boeticus
This is a subsaharan migratory species, just like the well known Vanessa cardui. Building up populations after winter, each generation moves up further north into Europe, retreating back south when northern winter starts again. This species is fairly common in the Canaries with locally nice numbers together. Probably the species breeds throughout the year in the Canary islands. 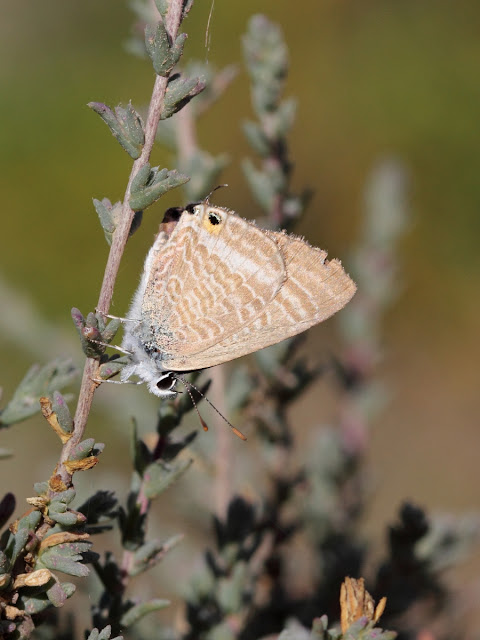 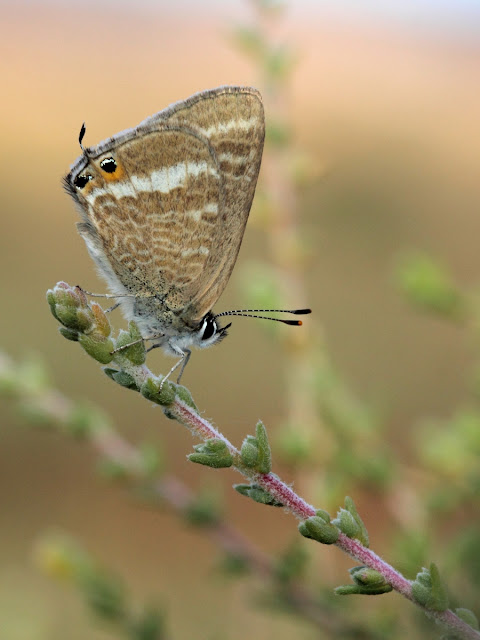 Leptotes pirithous
Just like previous species this is an African migratory species, however reaching less far north into Europe where populations never really reach far beyond the Mediterranean region. Unlike previous species this one is only recently known from the Canary islands, only since halfway the 1990's observations became known of the Canaries but now it has been seen from all of the islands already. 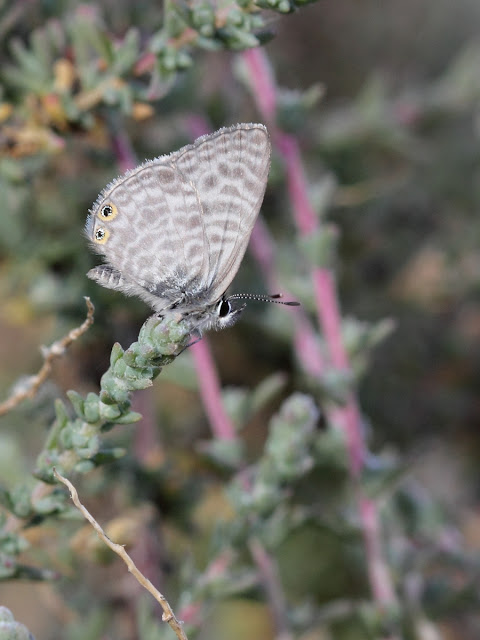 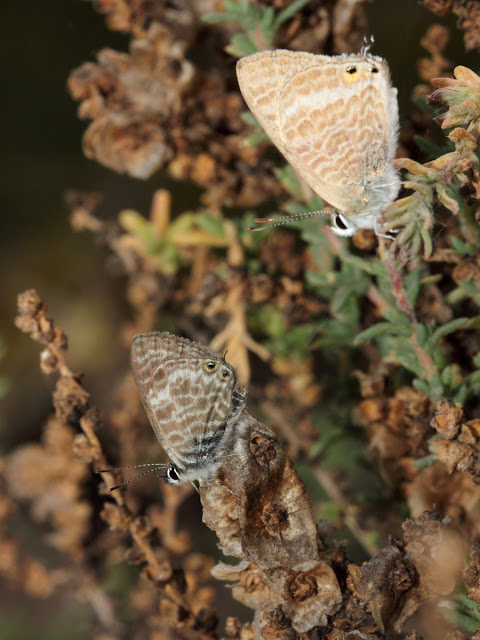 
Polyommatus celina
This taxon replaces Polyommatus icarus in N-Africa and some extreme southwestern parts of Europe and has no definite external characters but differs clearly in mtDNA. In the two easternmost Canary islands it is present as well and not uncommon wherever the larval foodplant Lotus lancerottensis is present. There are records from some of the more westerly islands as well but these remain unconfirmed and may refer to misidentifications with other species of blues present. 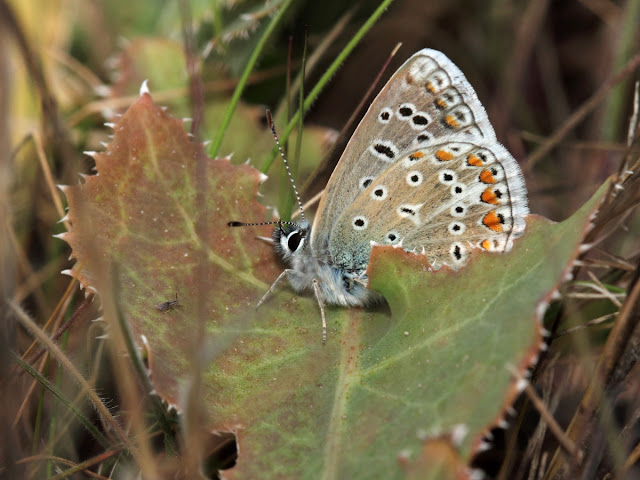 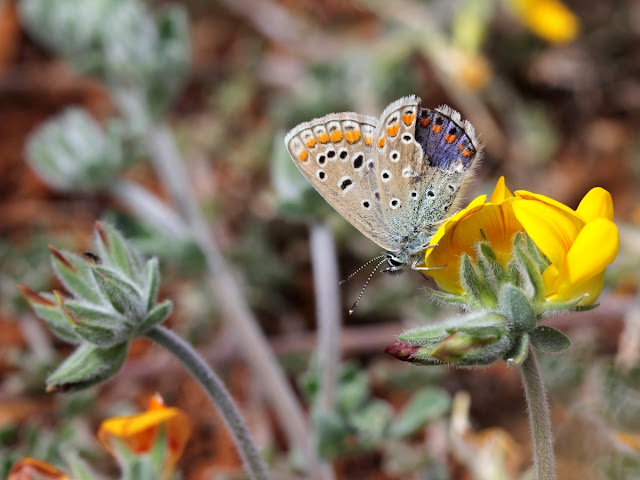 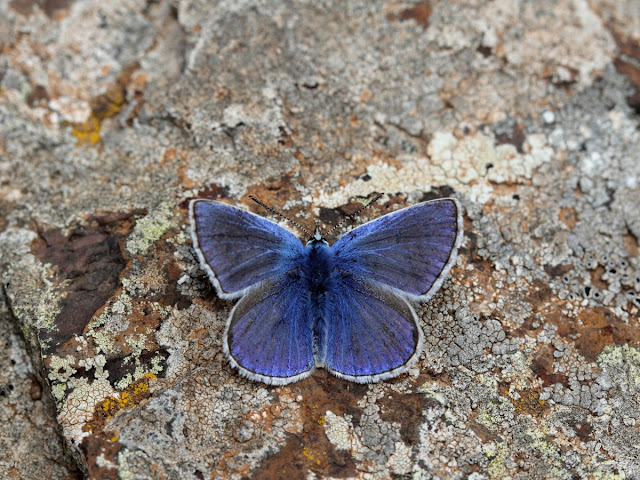 Aricia cramera
Present on the 5 westernmost Islands. It replaces Aricia agestis in the Iberian peninsula and northern Africa. We didn't see it last year on Tenerife or La Gomera but found it not uncommon on Gran Canaria this year on some semi-natural grasslands. 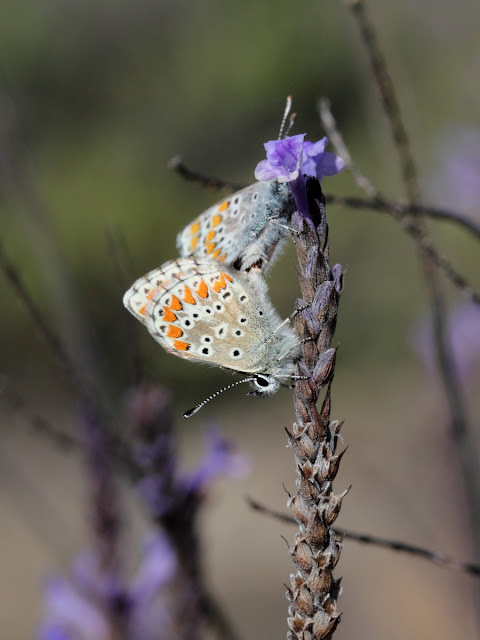 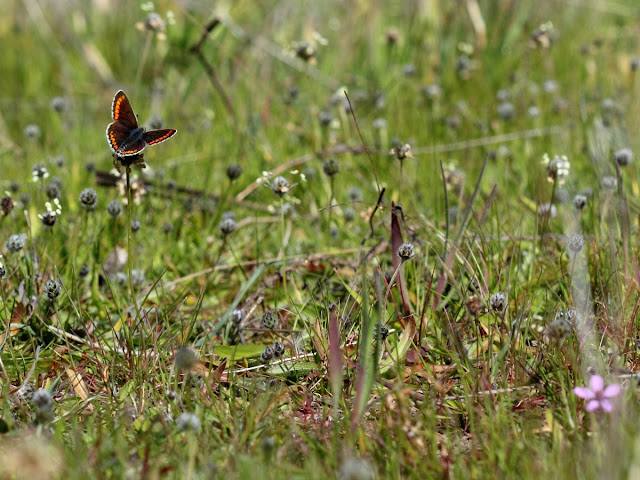 Zizeeria knysna
Mostly on grasslands around human settlements but the male pictured here was found in a dried up barranco in semi-natural environment. 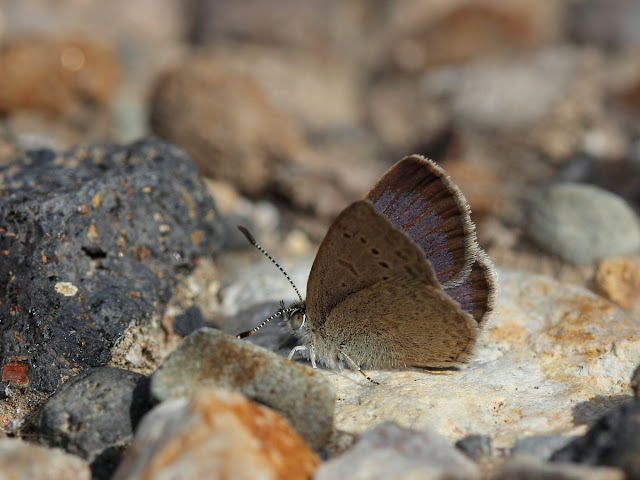 Azanus ubaldus
This is a desert species with a distribution from central Asia to N Africa. Until recently there were only a few sightings from the Canary islands, except from one Fuerteventura sighting all of them from the southern tip of Gran Canaria. Recently more about the life cycle became known.
It is a very small species flying at high speed through the branches of its larval foodplant, in Gran Canaria the non native Acacia farnesiana and Prosopis juliflora. After more than two hours of observations I saw the species on some 5 occasions, some of these probably concerning the same male doing patrol flights. Unfortunately I was not able to make pictures in the field because never I saw the species sitting down. With some mechanical help however I could confirm the species, as these same trees are used by Leptotes pirithous as well. The latter is however a slightly bit bigger and brighter blue and has a less erratic flight. Both confirmed larval foodplants are used as ornamental plant on the Canary islands, above that both species, and especially Acacia farnesiana, have a tendency to become invasive species. We saw lots of Acacia farnesiana in some abandoned fields along the GC-505 road just N of the main highway, unfortunately too late on the day to stop and have a check for Azanus ubaldus. 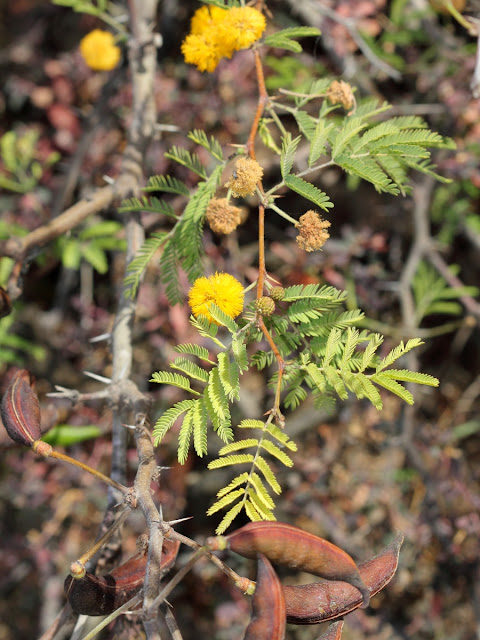 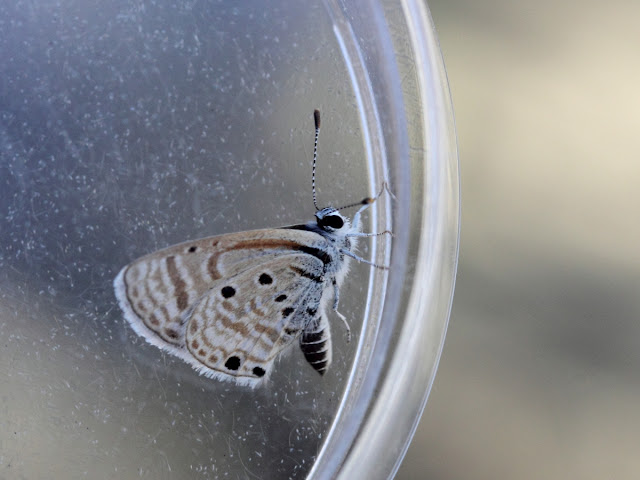 Posted by Pieter Vantieghem at 17:41