During my whole trip I controlled Melitaea species from the athalia-group on male genitalia according the method explained in the Lafranchis-guide, all males depicted on picture here are controlled with a 20X loupe. In the Drôme-Vaucluse area I was happy to find 3 different species. 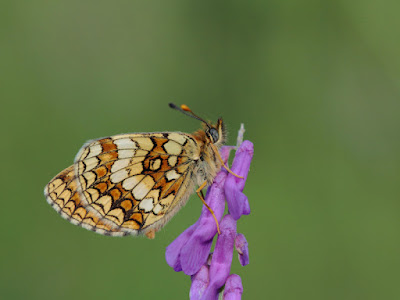 Melitaea (athalia) nevadensis (=celadussa), male
According to the recent work on the genus Melitaea by Coutsis & Van Oorschot the southern morph of Melitaea athalia should be regarded as a separate species and the valid name should be nevadensis instead of the often used celadussa. This was definitely the most common Melitaea to find, nevadensis in the south and athalia s.s. in the north (see part I). 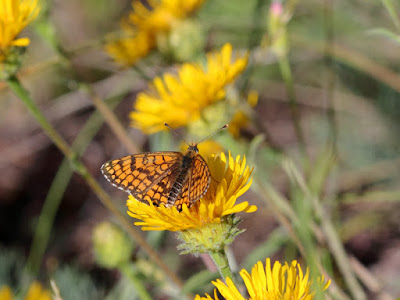 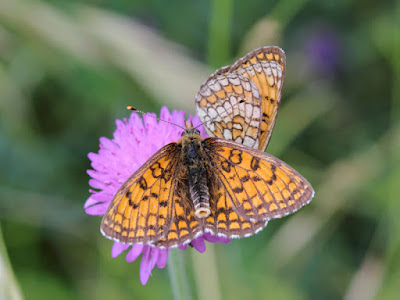 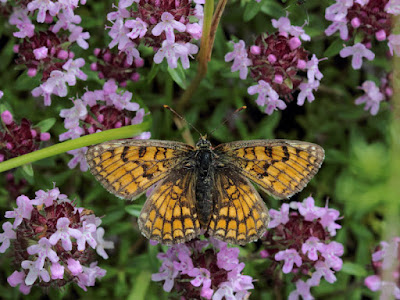 In a more humid valley I found several Melitaea parthenoides. Two males in upper pic, a female in the lower pic.

The more easy to recognize Melitaea didyma was present at lots of locations as well. 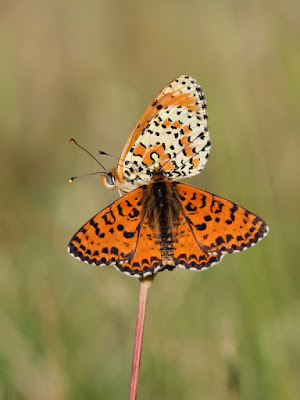 Another nice Fritillary species to see was Euphydryas aurinia of the Provencal subspecies provincialis. A few late ones at approx 1000m. A nice overview of the several French subspecies of Euphydryas aurinia can be found on the website of Lafranchis as a sample page of Lafranchis' recent ecological guide here.
I can only advise any one withe a good interest in ecology of European butterflies to buy this guide, although it is a bit pricey, I believe it is worth the price. It is a very descent work with lots of nice photographs and good information on ecology of all French butterfly species. If someone would doubt between the new fieldguide and the more expensive ecological guide I would certainly advise to buy the ecological guide. 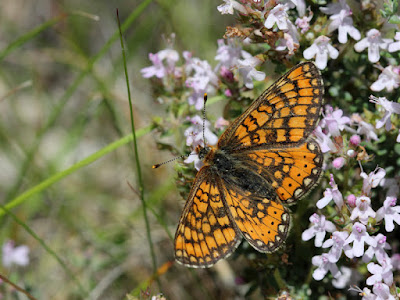 A nice species to find were some late specimens of Melanargia occitanica, a species I hadn't seen before 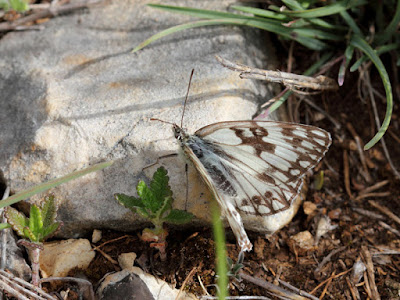 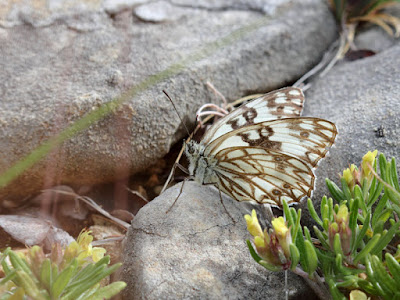 By controlling Brassicaceae on a regular base I found several caterpillars of Euchloe crameri, one of the southern spring whites 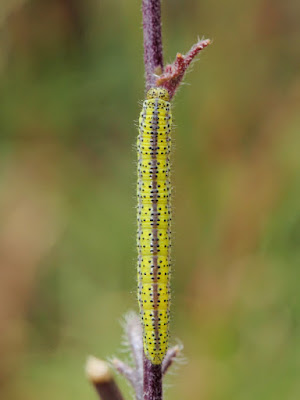 I was surprised to find some colonies of Polyommatus hispanus still thriving after half of June, I would have expected to be in between spring and summer generation but at one location I found a population of several hundred of individuals from clearly abraded to nearly fresh. I would not be surprised if the latest individuals of spring generation would be still on the wing when summer generation starts to emerge... 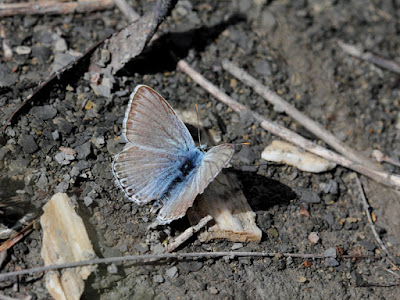 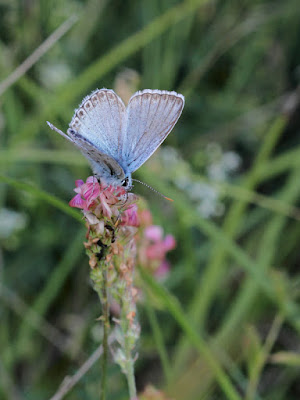 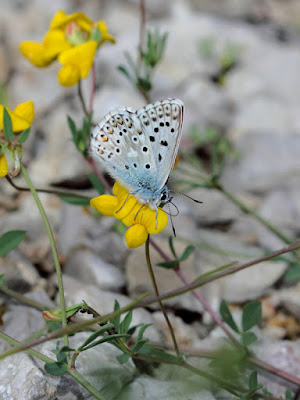 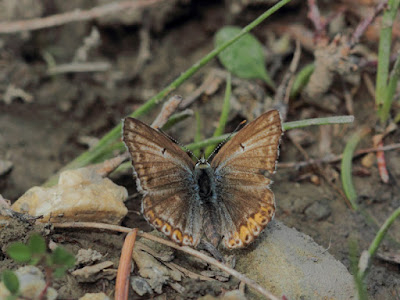 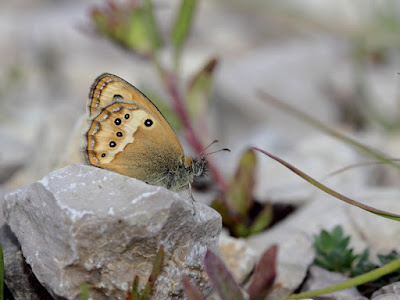 In the Bouches-du-Rhône/Var area my main target was to see Laeosopis roboris. The main flight period of this butterfly is a bit earlier than the periods when I have visited its distribution so this time I wanted to search for it specifically. And with success, I saw the species at 3 locations. 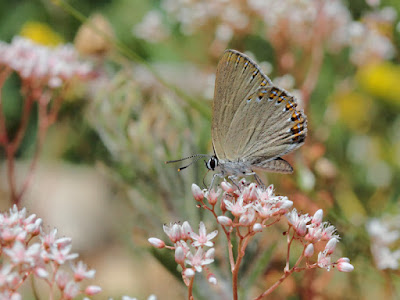 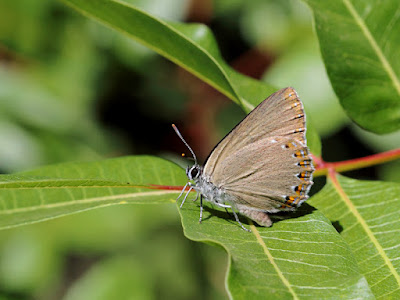 Another nice species to see in France was Brenthis hecate, a species with a limited distribution in France: 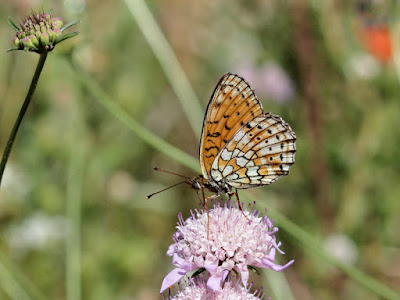 In the previous part you could read about Hipparchia (hermione) genava, this is however a male of the related and very similar species Hipparchia fagi: 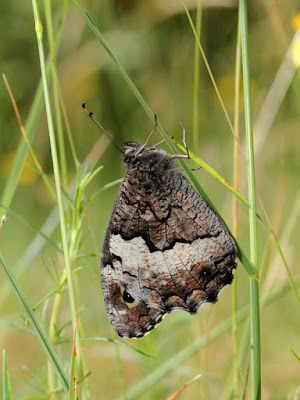 One of the least expected species of the trip was Polyommatus dolus. I had seen this species in the same region in august and flight period is mostly described as starting half of July. So a nice surprise to find a freshly emerged female just past half of June. A nice white fringe to upperside of both front and hind wing and a very vague pale central stripe are the features to tell this one apart from Polyommatus ripartii. 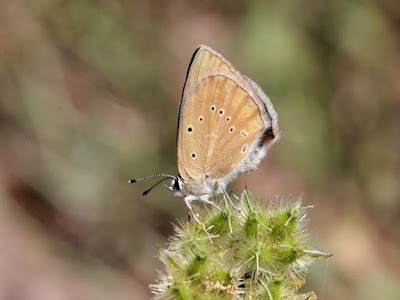 More on Corsican endemics in the next episode

Posted by Pieter Vantieghem at 00:30