When browsing through all sorts of citizen science pages collecting nature observation data I notice there is still a lot of confusion about the determination of some widespread orange Hesperids in at least NW-Europe but definitely also outside that area.
Recently, together with some marvelous butterfly scientists, I could publish a paper concerning this matter, especially about the consequences of these difficulties in determination for the conservation of these butterflies. The article can be found here, anyone interested in more information can contact me: https://link.springer.com/article/10.1007/s10841-016-9924-4
But of course, these kind of articles are not the right location to put more information on the field determination criteria as only few of the involved citizen scientists read the scientific literature on butterflies.
For this reason I wanted to repeat some information on my blog. Some of you may think that this is not really necessary anymore with new butterfly field guides still appearing every now and then. Well, then have a good look on this page, scanned from the recent "Papillons de France" book (2014). Although the pale spots are nearly invisible on the picture the hooked tips of the antennae leave no doubt that the individual on the right upper side doesn't show a Thymelicus lineola but an Ochlodes sylvanus!!! 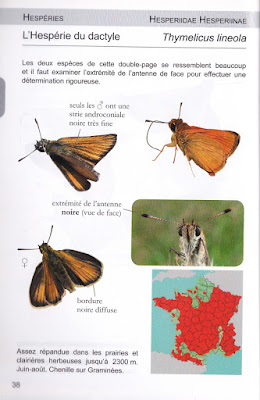 Although I believe that the author, T. Lafranchis, achieved a lot with his books on European butterfly determination - making butterfly determination accessible for many thousands of people - as well as with his publications on butterfly ecology, such mistakes may eventually lead to large uncertainties in distribution databases (strikingly the distribution map shows T. lineola to be absent in the very NW of France while in fact in adjacent parts of Belgium it is the most common Thymelicus!) making it impossible to investigate what conservation measures should be taken to help certain species.
I will talk about 5 species only in this thread, although there are some more orange coloured skippers in the WP area, some of them are confined to far away regions where citizen science is still not the major means to collect distribution data (Thymelicus hamza, Thymelicus hyrax, Thymelicus novum, Ochlodes hyrcana) or where no other species is present that can cause confusion (Thymelicus christi).

This fresh male shows the golden orange colour of the upperside. The black border on the wing diffuses to some extent in the veins. The androconial stripe is short and straight, in fresh males you can see that it consists of two parts with a very short stripe extra near the wing base. 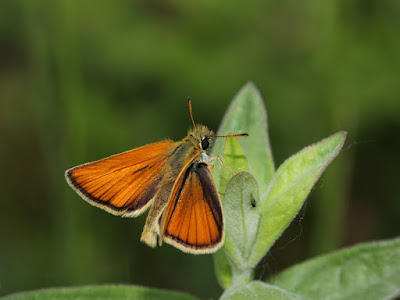 The underside of the antennal club is black. Care should be taken however in abraded specimens late in the season, where this colour can fade to brown making confusion with T. sylvestris to become a big pitfall. In very abraded specimens it can therefore be advisable to keep the determination on Thymelicus species (although analysis from the genitalia in those cases will always give away the true identity but this is work for specialists). 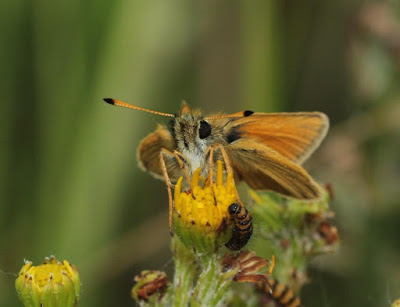 The underside is straw coloured, sometimes with a grayish or even a greenish hue, underside colour however should only be used as indicative and not as discriminating character (see T. sylvestris). 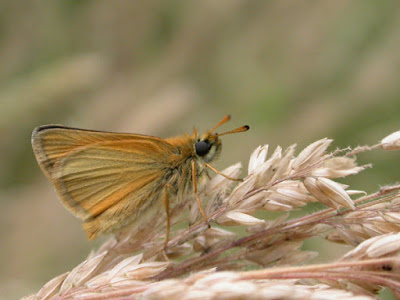 Thymelicus sylvestris
Much alike previous species but there are some differences. A common species in large parts of Europe. At least in Flanders - and in the Netherlands as well - this species seems to suffer and decreases have been noted, as well in distribution as in abundance.

The main feature from previous species is the underside colour of the antennal club. This is brownish to orange. This feature is best to be seen in front view, evaluating this feature from the upperside will eventually lead to wrong interpretations. 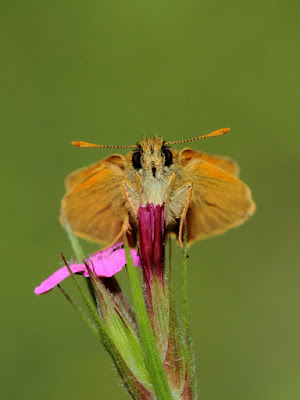 The androconial stripe is slender but long and curved, fresh males can mostly be recognised by this. The black hind border is a bit more demarcated. 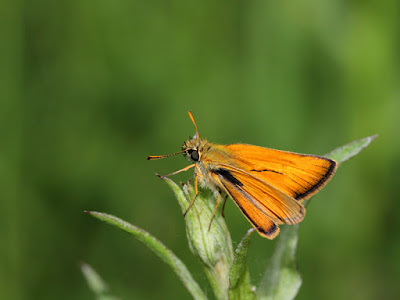 The underside of the hindwing and underside of frontwing tip mostly have a greenish hue and sometimes this is described as a feature to T. lineola where the underside more has a yellowish straw colour creating a less clear contrast between the colour of the base of underside frontwing with the wingtip. I strongly advise not to use this as a discriminating feature. Although the trend is certainly there, the colour of the underside is variable to some extent with some T. lineola having a bigger contrast and some T. sylvestris not showing much of the contrast. Apart from that, interpretation of colours and such contrasts from pictures is very dependent on lightning circumstances and camera settings. A good example of a picture showing T. lineola with a nice contrast between frontwing tip and base can be found here. 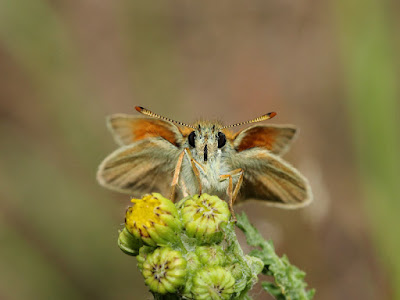 Thymelicus acteon
This is the rarest Thymelicus species in NW Europe. A lot of people claiming to have seen this species refer to the very small size and indeed this is the smallest of NW European orange skippers. However, the small size on itself can never be enough to conclude for this species! Male forewing length is described as being 11-13mm in Higgins & Riley for T. acteon while in T. lineola male forewing length is 12-14mm, so this means an overlap op 50% in males! When we then take into account that females normally are a bit bigger than males it is not so uncommon for an individual of T. lineola to be smaller than a T. acteon!
As in T. sylvestris the underside of the antennal club is orange. The underside of the wings is unicolourous orange-like, sometimes a bit more grayish.
When suspecting to see this species, one should really try to get a view on the upperside as there the best clues are to be found. The ground colour of the upperside is clearly more brownish than orange, unlike previous two species, lacking the golden hue.

A male T. acteon clearly showing a more brownish ground colour a long, slender and curved androconial stripe and showing the faint half circle of pale spots in the wingtip (pictured in Belgium by Wim Declercq, clicking on the picture brings you to the original location) 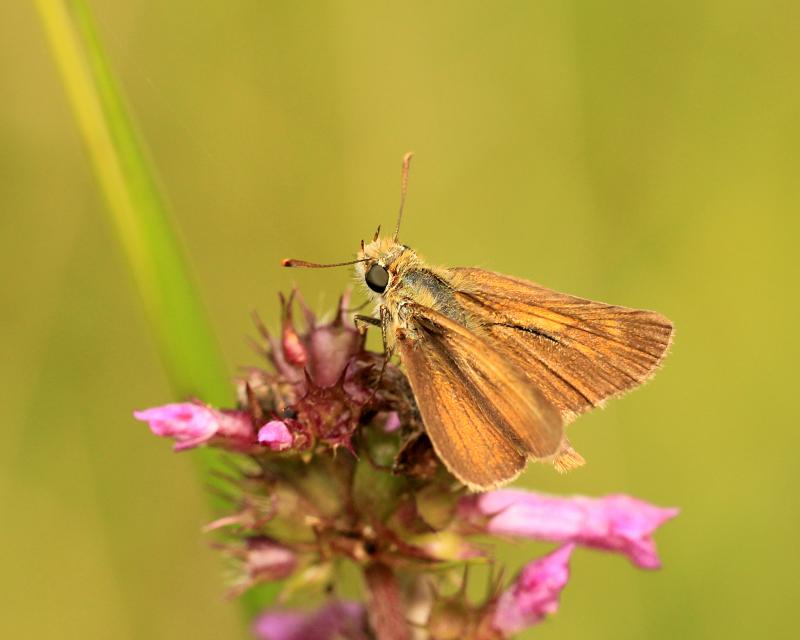 In females of course the androconial stripe is absent but the half circle of pale spots is more clear and can't be missed. 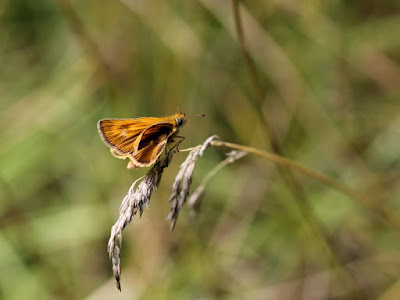 Ochlodes sylvanus
This is a common species in large parts of Europe, often found in conditions that are a bit humid, f.e. rather at a forest edge than on large steppe grasslands. The frontwing edge can sometimes be a bit concave and the wing is more pointed than in the Thymelicus genus. Pale spots are obvious on upperside frontwing and contrasting with the darker brownish outer edge. Androconial stripe in males are broad and long, there is a clear S-shaped curve in it, with the broadest point in the middle. The antennal club has a clear and long hook. 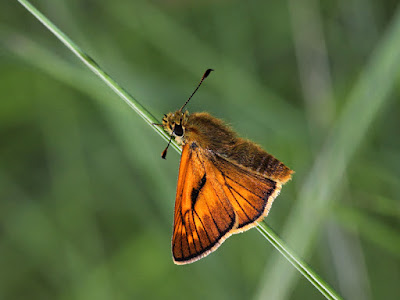 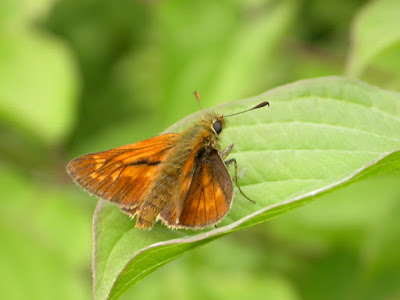 Pale spots are visible on the underside hindwing as well but in very fresh specimens can remarkably be far from obvious while in some abraded individuals the spots on the underside can remind of the next species. 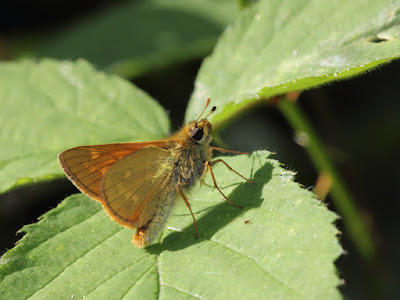 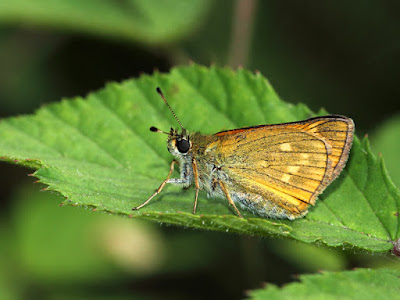 A fresh (upper) and an older (lower) specimen

The underside of the antennal club has a black tip as well, like in T. lineola, but the hook should always be obvious. 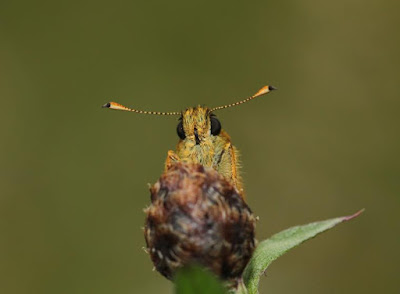 Hesperia comma
This species is a bit more confined than several of the common previous species. In NW Europe it is mostly found on dry heathlands or large dune complexes. In central Europe it is found on large calcareous grasslands, poor mountain grasslands, large steppes,...
Like in previous species the antennal club is hooked, however the club itself is a bit shorter and thicker and the hook as well is shorter than in previous species.
The androconial stripe is more triangular - broad at the base and pointed to the wingtip - and less S-shaped as it is in Ochlodes sylvanus. Clearly visible in this picture by Robin Septor (again, clicking on the picture brings you to the original location) 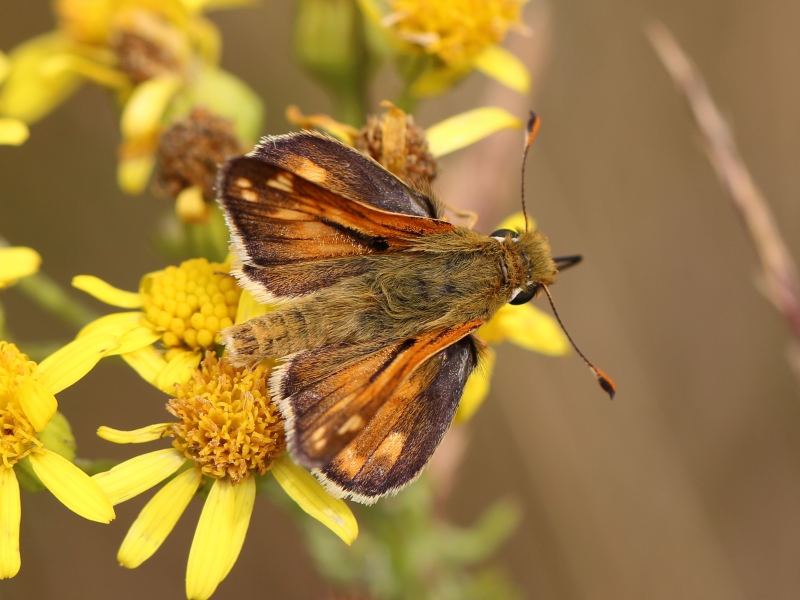 The spots on the upperside are clearly visible and the two outermost spots are a bit more demarcated from the other spots, more than in Ochlodes sylvanus. As can be seen on this female. 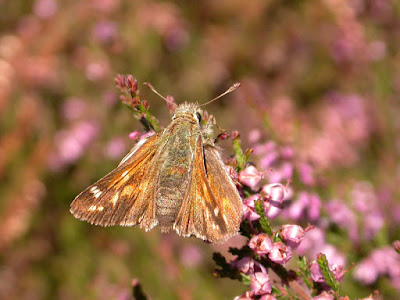 Underside is greenish, sometimes with olive hue. On the underside hindwing as well, spots are clearly demarcated and the comma-shaped spot in the wingbase is what gave this species its name. 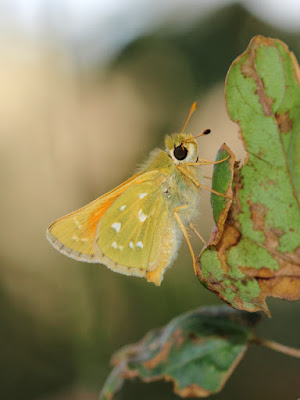 There is some variation in the size of the pale spots on the underside, this variation has led to description of some subspecies. In this Spanish individual the spots are bigger and the ground colour is faded to brown. 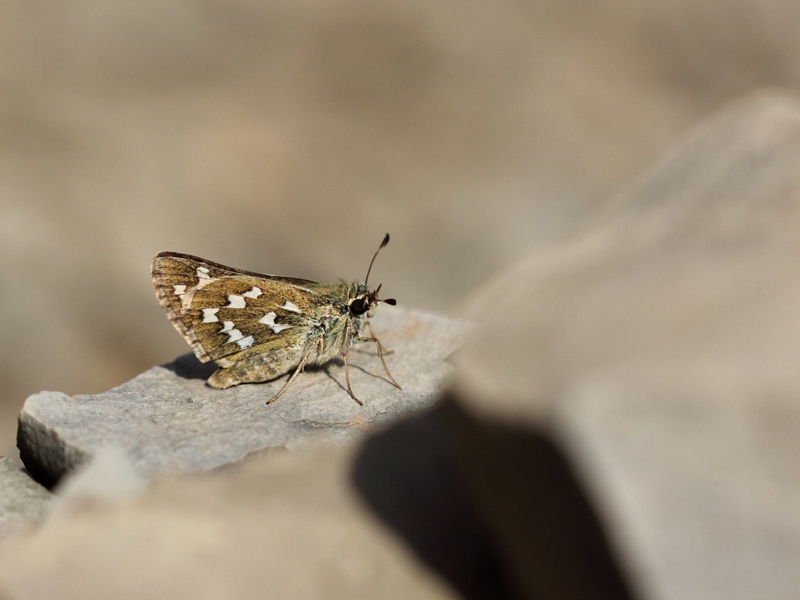 Posted by Pieter Vantieghem at 12:06