The Iberian peninsula is a Lycaenid paradise
Enjoy. 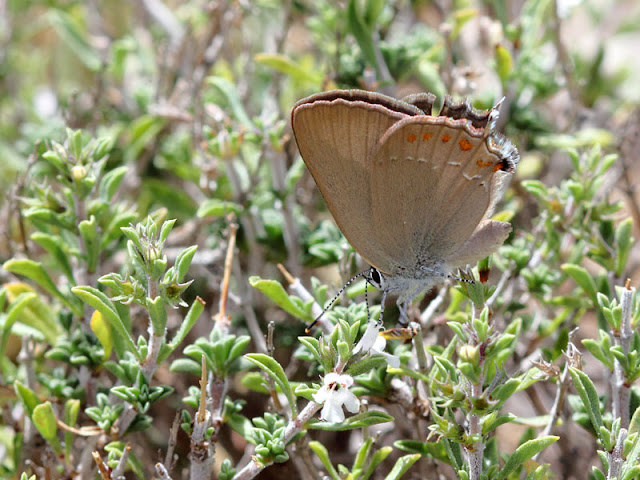 In some southern coastal and desert like regions of Andalucia, like Cabo de Gata, this North-African species has some colonies. Butterflies are most easily found in the immediate vicinity of the larval foodplant Zizphus lotus. 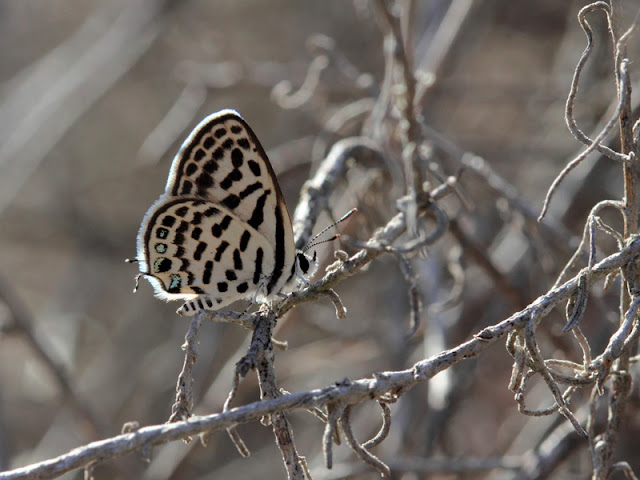 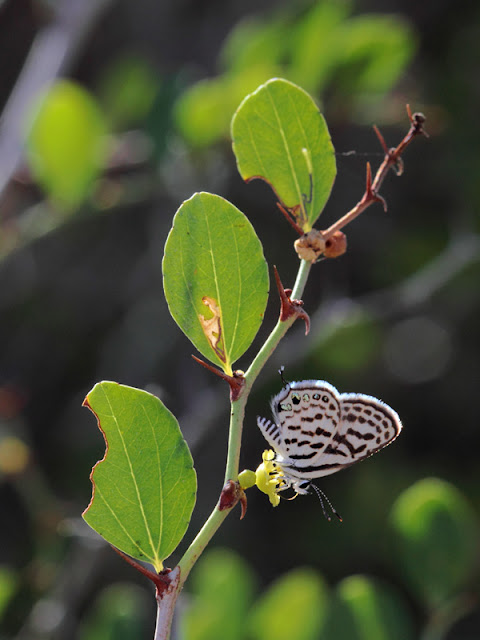 Second picture shows the treacherous spines on the larval foodplant

Zizeeria knysna
A species with mainly an African distribution reaching Europe in the lower coastal zones of the Iberian peninsula. A species that can easily be found in S Spain in the vicinity of human settlements in grass lawns that are kept humid throughout summer. A very active and very small species so I was still happy to be able to make the picture here under. 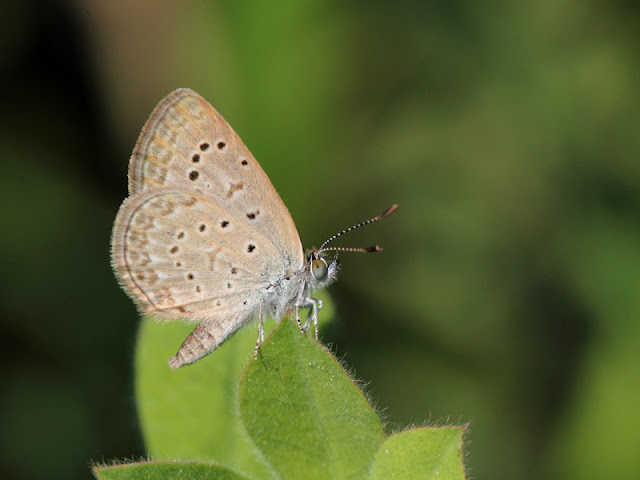 Aricia (artaxerxes) montensis
This taxon was long time considered as a subspecies of Aricia artaxerxes, with some uncertainties on the exact distribution, some authors even placing populations of Greece under this taxon. Out of genetic research however it seems that the populations of the Iberian peninsula and N-Africa form a different genetic clade and the name montensis should belong to this clade. More information can be found in this article of Claudia P. Sañudo-Restrepo et al. Following map comes out of that article 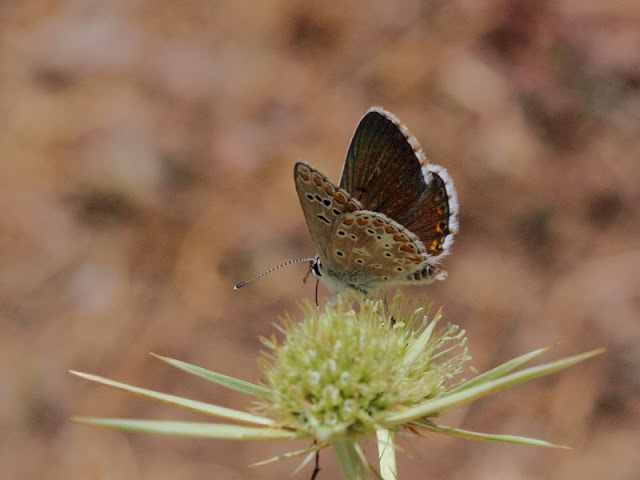 The taxon is found in lots of mountainous areas in Spain, here in the Sierra Tejeda

Aricia morronensis ramburi
This is a local mountain species restricted to the Iberian peninsula, several subspecies have been described and precise relations between these subspecies is not yet fully understood. In the Sierra Nevada the subspecies ramburi can be found on barren, rocky screes where the larval foodplant of the genus Erodium is found in high numbers. 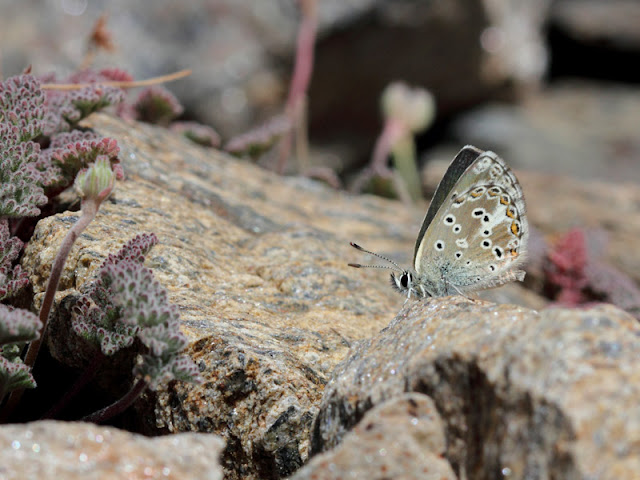 freshly emerging foodplants, probably Erodium cheilantifolium, can be seen on the left of the picture

Plebejus zullichi
This species is an endemic of the high zones of the Sierra Nevada. We searched for it on one of the smallest populations on the Veleta and could find one female in difficult circumstances with lots of wind. Unfortunately just when I wanted to start taking pictures the female flew off and got lost out of sight in the wind... So I can not present you any pics, I will certainly be back one day to search for it on the bigger populations of f.e the San Juan or the Mulhacen.

Polyommatus (Polyommatus) escheri
A widely spread species in mountainous areas of Spain. Larval foodplants are Astragalus species. There is some confusion to the subgeneric status of this taxon. Some authors put it in Agrodiaetus or Neolysandra, the most safe option however will probably be to put it in Polyommatus s.s. 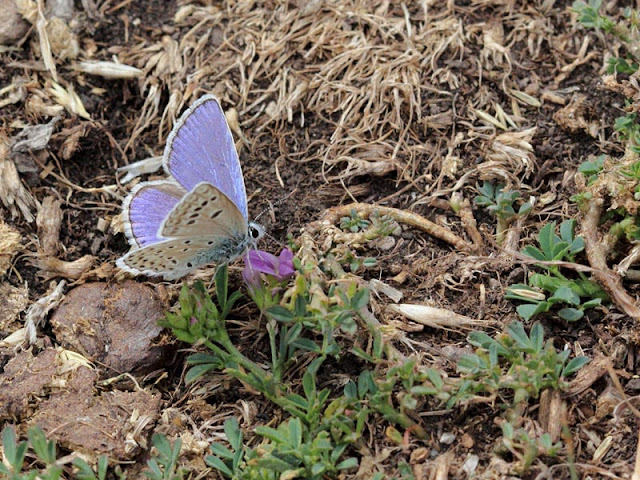 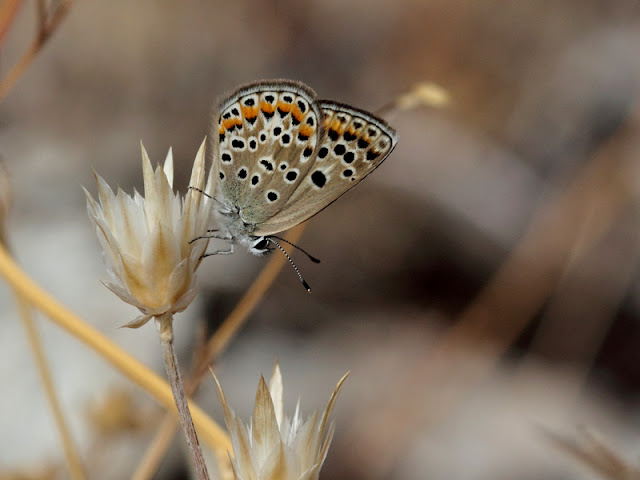 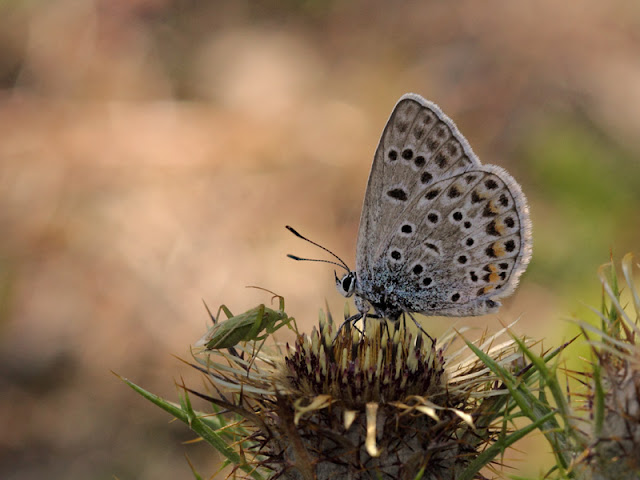 First two pictures show a male and female from the Sierra de la Sagra, last pictures shows a male from the Sierra de Albarracin. I had some difficulties with the determination of the female as it has a very Aricia-like pattern on the underside. With the help of the opinions of some other people I found however some pictures of females with similar, albeit not this extreme, pattern on underside hindwing. Apart from the Aricia-like pattern near the upper edge of the hindwing the rest of the pattern looks typical for P. escheri female. 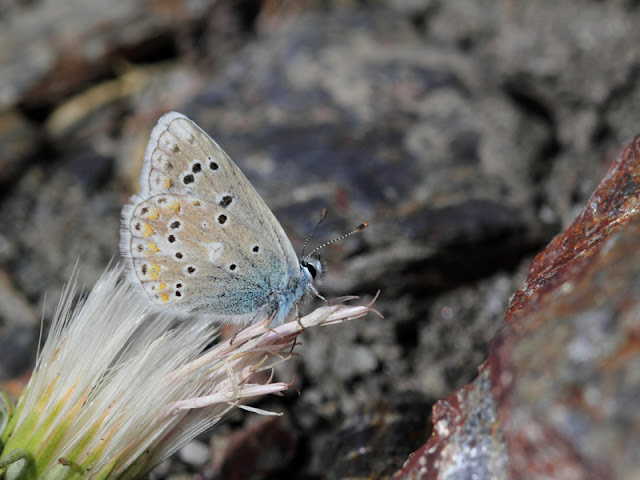 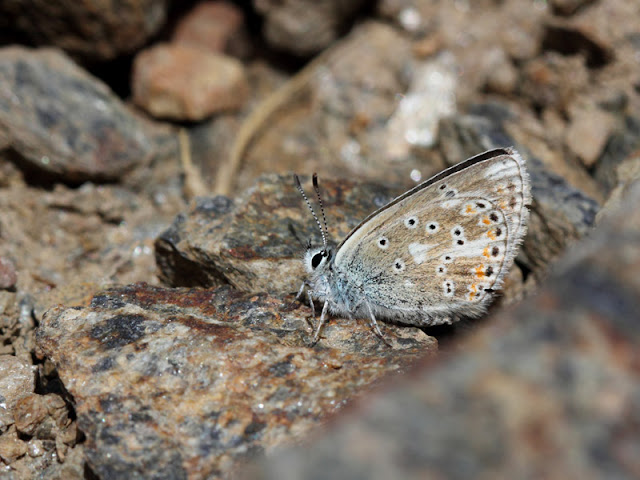 Male (upper) and female (lower) of the nominate subspecies, easily found on the Veleta, above 2500m in the Sierra Nevada 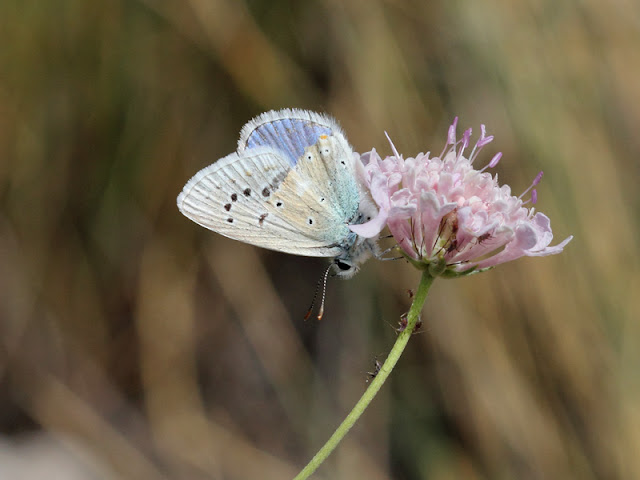 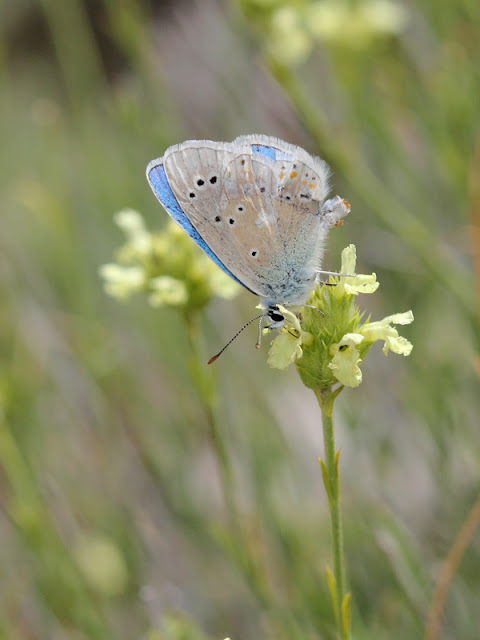 Two males of the brighter colored subspecies sagratrox, clearly already abraded half of july, above 2000m in the Sierra de la Sagra

Polyommatus (Plebicula) nivescens
And yet another Iberian endemic, to be found in mountain ranges all over the country from the southern slopes of the Pyrenees to the Sierra Nevada, local and never really common. Picture below shows an individual of Sierra de Albarracin. 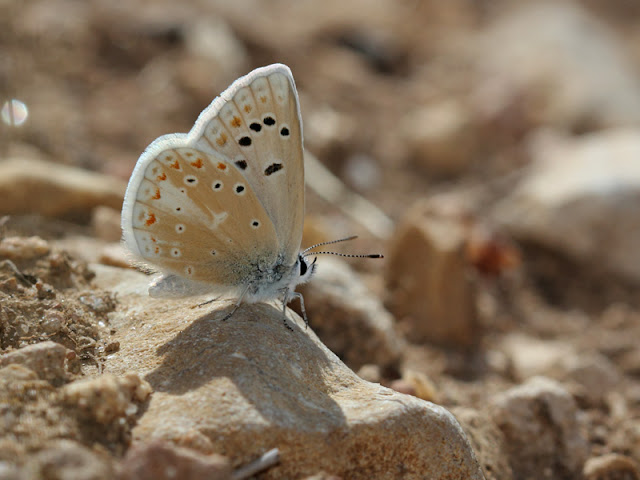 Polyommatus (Agrodiaetus) fabressei
The subgenus Agrodiaetus consist of a series of very similar species, the most representatives of this subgenus can be found in W and C Asia, several species however can be found in the western mediterranean as well.  Several of the species show some phenotypical regional variability. Out of recent genetic studies it seems that some taxa described in the past should be synonimized and geographic distribution of some species is different than previously thought. An article on this matter by Vila et al. can be found by clicking here. Out of this research it seems that Agrodiaetus fabressei is limited to central Spain. The species is not uncommon at higher levels in Sierra de Albarracin. 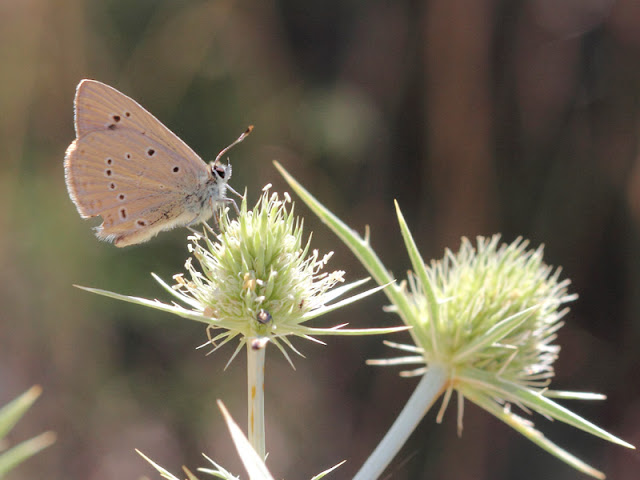 Polyommatus (Agrodiaetus) violetae
This species was initially considered monotypic being endemic to the Sierra de Almijara and Sierra Tejeda. The taxon subbaeticus from the sierras in the  NE of Andalucia, that was initially described as a subspecies of previous species, is nowadays however placed under this species (see article in previous species account). 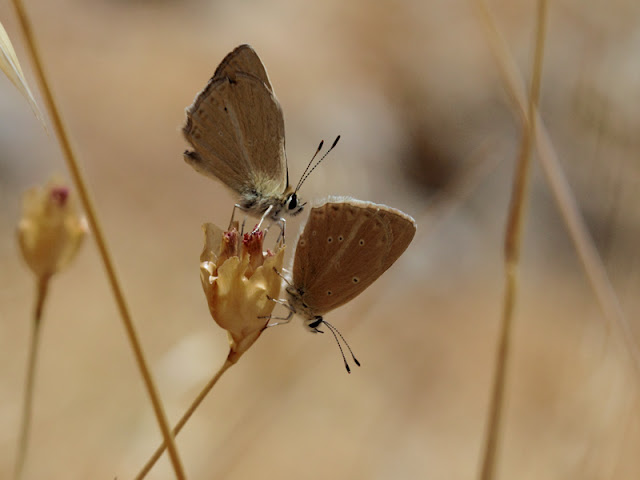 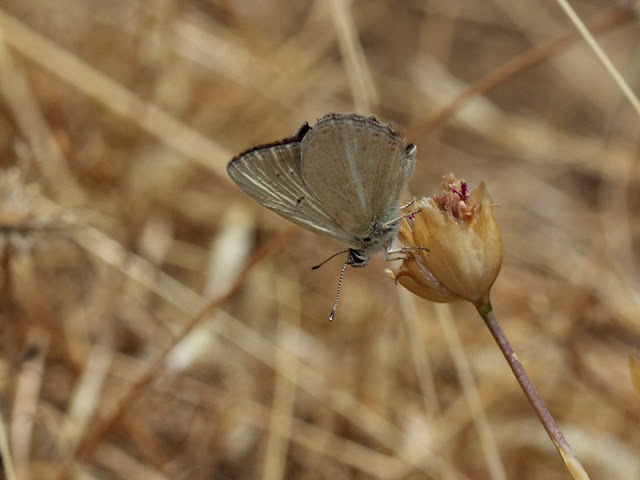 Nominate in the Sierra Tejeda at 1500m 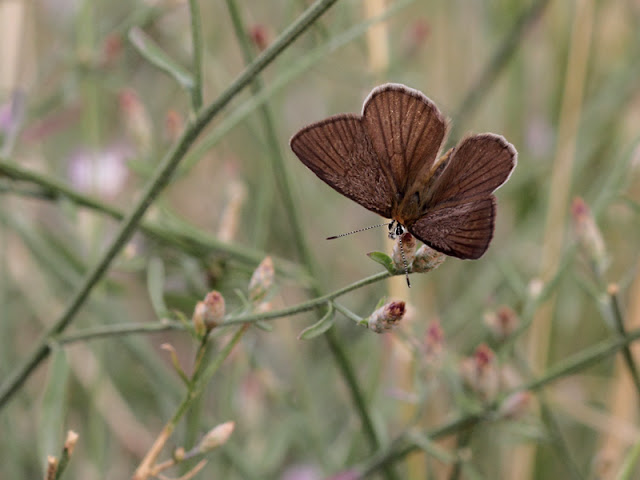 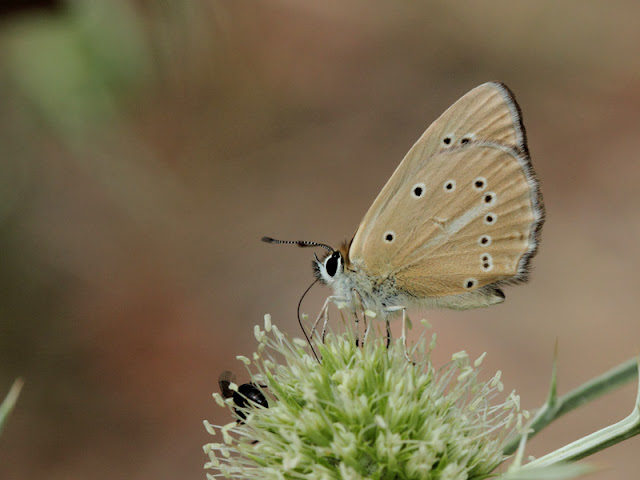 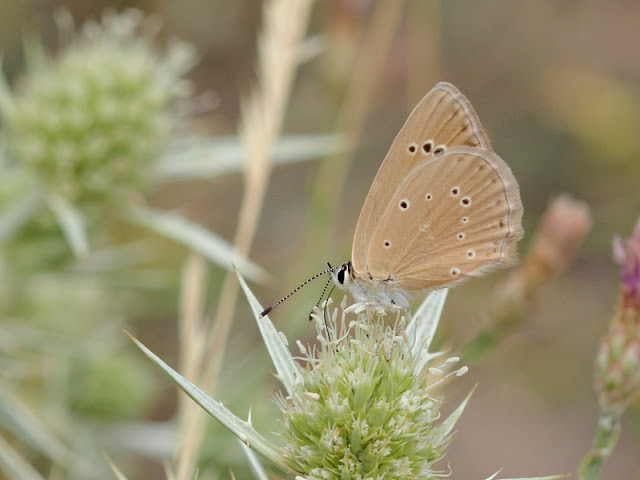 subspecies subbaeticus, all pics from Sierra de la Sagra. First picture shows why these blues are called 'furry blues', the males having a broad hairy scent mark on the front wing. Both pictures of the underside show the variation in the presence of a white stripe on the underside hindwing. We have seen this species in the Sierra de Cazorla at 670m and Sierra de la Sagra between 1300 to 2000m.

Polyommatus (Lysandra) albicans
The Lysandra subgenus is one of the several difficult to determine groups within the Lycaenids, especially in parts of the Iberian peninsula where the distribution of several species comes together. This seems to be a group of species that only relatively recently evolved and due to this and regular hybridization between the taxa it seems very difficult to find genetic lineages as well in this group. Luckily in the very south of Spain only one of the paler species is present. This is the palest and biggest of 3 pale Lysandra species, in flight at first sight it even remembers sometimes of a Pierid. The other pale Lysandra species being Polyommatus coridon with a wide distribution over a large part of Europe and the bivoltine Polyommatus hispanus that is present from NE quarter of Spain along the French Mediterranean area just into Italy. 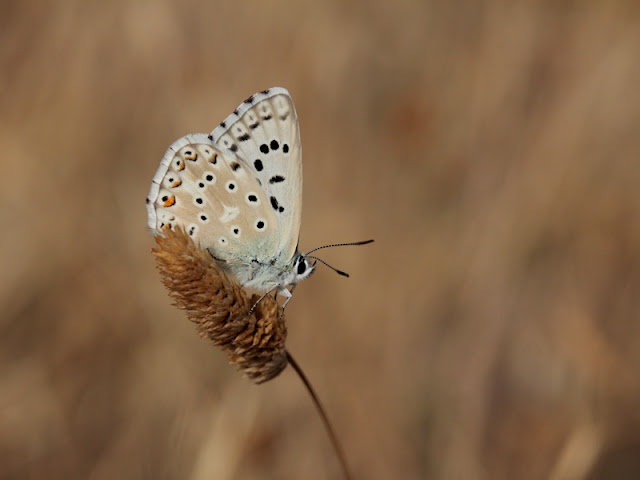 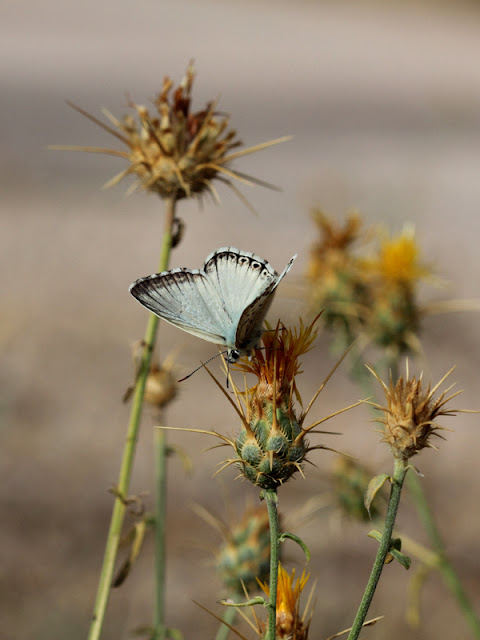 Polyommatus (Lysandra) (coridon) caelestissima
The taxonomic status of this taxon is still unclear. It is sometimes considered as a species on its own, but even so considered as a subspecies of Polyommatus coridon. The upperside is a clearer blue than that of P. coridon. It is restrictedto the eastern part of the central Iberian mountain system. In Sierra de Albarracin it is common between 1400-1700m. 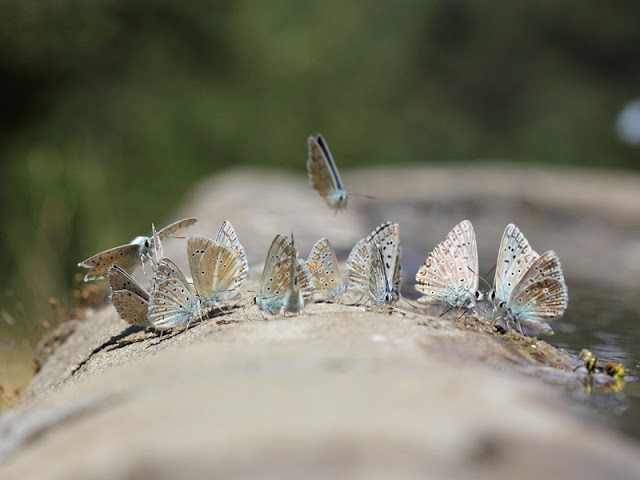 This picture shows at least two other species, Polyommatus (Agrodiaetus) damon (forth from the left) and Polyommatus (Polyommatus) icarus s.l. (in the center under the flying individual). 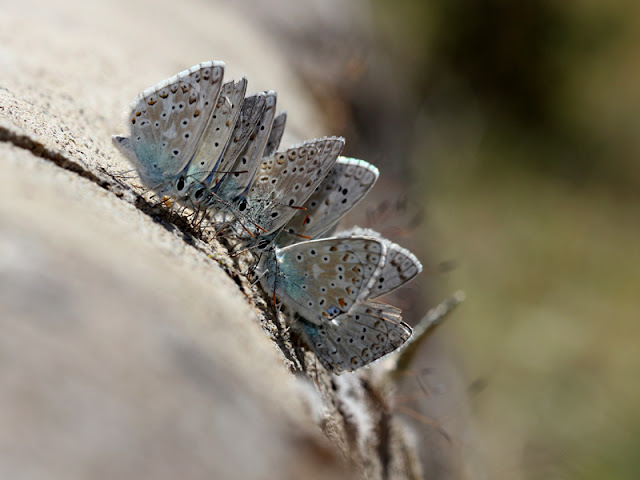 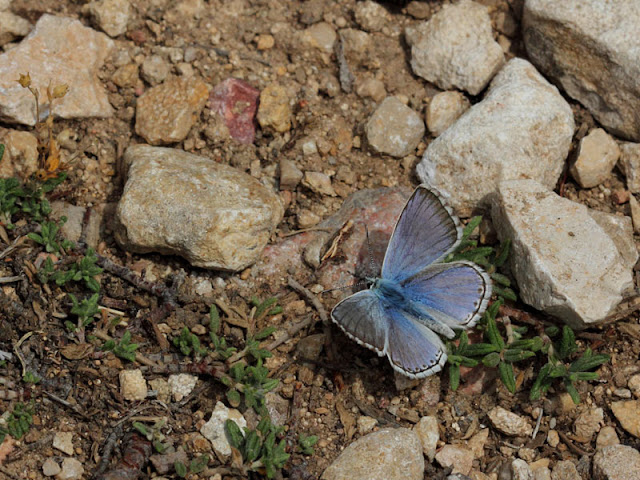 More on nymphalids in the next episode...