For several years Fauna Europaea (FE) offered a stabe taxonomical list for European fauna, including butterflies. Funding however for the FE project had dried up and several attempts to keep the project running seemed to fail. Meanwhile new developments in taxonomical research couldn't be implemented in the FE species lists. This led to a situation where the FE species list for butterflies became outdated and as such less suitable as a widely accepted tool in butterfly research and conservation. For this reason the species specialists for butterflies on FE took the initiative to write a paper summarizing the most important updates to the European butterfluy species list.

This paper can be found here:

An updated checklist of the European Butterflies (Lepidoptera, Papilionoidea)


- First of all there are a bunch of new taxa in the list, these can be divided in two groups:

Newly discovered species
As the European butterfly fauna is already well known only few species fit in this category.
In a few cases this involves names that where already in use for a longer time, although the species discoveries are really new and in some cases unexpected.

Spialia rosae Hernández-Roldán, Dapporto, Dincă, Vicente & Vila, 2016
This taxon was split from S. sertorius based on constant differences in mtDNA, chemical profiles and ecology. At this point only known from Spain, although presence in mountainous neighbouring regions in Portugal or France is possible. Larval foodplant is not Sanguisorba species like in most related species but Rosa species. 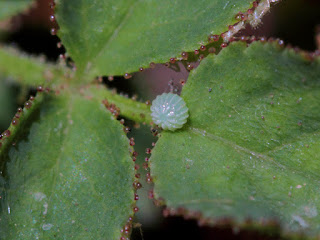 Spialia rosae egg on Rosa species, at the LT in the Sierra Nevada.

Zerynthia cassandra (Geyer, 1828)
This taxon was split from Z. polyxena based on differences in mtDNA and male genitalia. It is an endemic from the Italian peninsula and Sicily, where this pic was made.
For this taxon an older name has been digged up as this was the oldes available description for this taxon (LT in Tuscany). This name has been used to describe specimens from southern France as well but now this name has come inavailable to describe the French specimens. 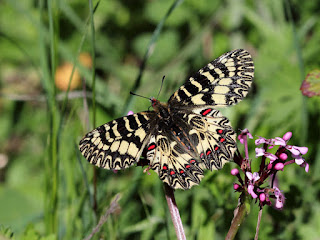 Leptidea juvernica Williams, 1946
For some time now we know that the Leptidea sinapis complex comprises of 3 species. Leptidea reali seems to be comprised to the western Mediterranean area while Leptidea juvernica is present - often sympatric with L. sinapis - in large parts of Europe.

Polyommatus timfristos Lukhtanov, Vishnevskaya & Shapoval, 2016
Based on differences in karyotype & mtDNA another species was raised in the Agrodiaetus subgenus. Determination in the field with Polyommatus ripartii seems hazardous... For now on only confirmed from the very south of mainland Greece.

Polyommatus celina (Austaut, 1879)
The difference between the group of realy new species and subspecies raised to species level is sometimes fine. The knowledge that specimens of P. icarus in S Spain, N-Africa & some Mediterranean islands were a bit different for example, was already long known but these differences were long considered to be very small. Wiemers & Fiedler (2007) were one of the first to notice the large genetic differences between these populations and the ones in the rest of Europe but on the external characters even write: "while in the latter species phenotypic differences have never been noted."
More research confirmed Polyommatus celina to be sufficiently different of P. icarus to be considered a species on its own. 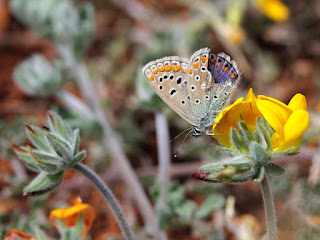 A female Polyommatus celina on Fuerteventura


Taxa raised from subspecies to species level
Long known subspecies but now evaluated as considerably distant from the nominate.

Iphiclides feisthamelii (Duponchel, 1832)
Species rank is based on the differences in genitalia and nucleair DNA (see Fig. 6 here). The taxon replaces I. podalirius on the Iberian peninsula & Northern Africa. More information on the border region of the two taxa in Southern France can be found here. 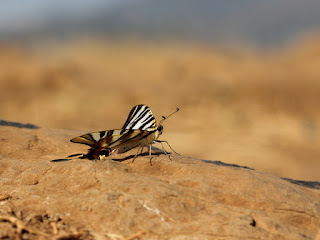 Pseudochazara tisiphone Brown, 1981
The genus Pseudochazara is a brain-racking genus with several very closely related taxa. Above that determination is hindered by large local variation (for example), apparently often induced by the local rock colour. A first step to unravel the complex via genetic research was set by Takáts & Mølgaard. Where this article was focussing on the Balkanic taxa, a next article by Verovnik & Wiemers soon followed focussing on a wider scope. Out of that research it became clear that the above taxon was not really related to the Turkish P. mniszechiiI. 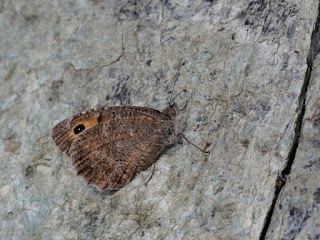 Pseudochazara amalthea (Frivaldszky, 1845)
Out of the same Pseudochazara research it became clear that P. amalthea from the Balkanic mainland was distinct from the nominate P. anthelea from the Greek Islands and Turkey. 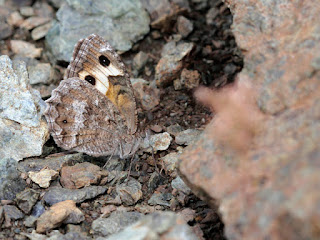 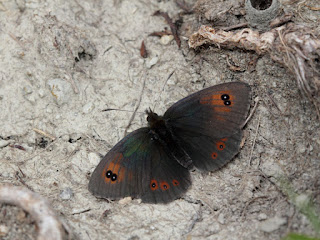 Erebia arvernensis in the French Alps

Melitaea celadussa Fruhstorfer, 1910
Apart from small differences in the genitalia the southwestern representatives from the Melitaea athalia complex seem to be genetically different as well, see following article. 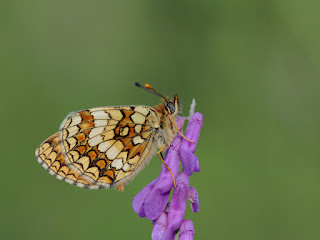 Melitaea ornata Christoph, 1893
The populations with red headed larvar in the M. phoebe complex seem to consist out of multiple species, the one in Europe is now called M. ornata while M. telona is confined to the Middle East 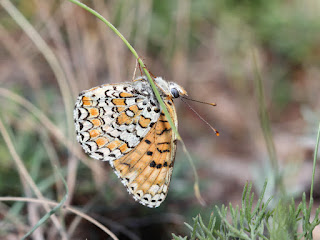 
- Name changes: these changes can involve 3 types of changes


Re-evaluation of the species name
Especially in older names there can always be some discussion on what name was published first.

Proterebia phegea (Borkhausen, 1788)
Another long known enigmatic species whose nomenclature has been subject for discussion since long time. The name Papilio afer was already in use for an African species of Nymphalid when Esper named this taxon as such. So the next name that pops up is Papilio phegea Borkhausen, 1788.

Re-evalution of the genus/subgenus
Especially in the Lycaenidae several former subgenera have been reinstated as genus, especially in the large genera Plebejus and Polyommatus. This descision is based on this research.
Following species of Lycaenids are concerned: 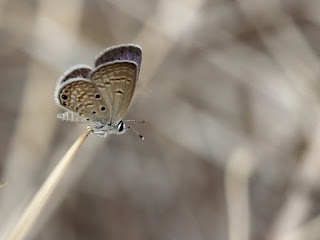 But also in the genus Argynnis there are some changes. Mainly based on following article. 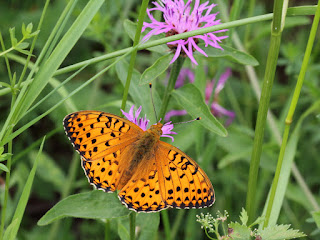 Speyeria aglaja seems to be more related to the N-American genus Speyeria than to Argynnis s.l.

Some small changes in the gender of species names 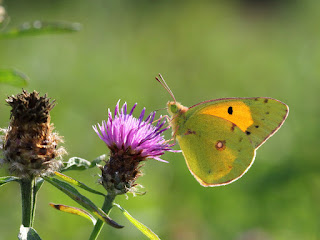 Several species have got a different gender to their species names.
For example Colias croceus has become Colias crocea. For a full list I refer to the original article.


Polyommatus eleniae Coutsis & De Prins, 2005
In 2005 2 species from the brown Agrodiaetus subgenus complex were described within a few months time, one from NE Greece but the first one was found not that far across the border in S Bulgaria, Polyommatus orphicus Kolev, 2005. Recent genetic research (see earlier with Polyommatus timfristos) confirms these taxa to be one species. 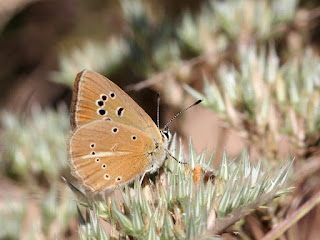 
This new checklist offers butterfly researchers & conservationists a stable list again to go on for a few years so they don't need to stay stuck to the knowledge from 20 years ago and butterfly research and conservation .
But this ofcourse doesn't mean that butterfly taxonomy is settled and there isn't anything left we can learn. There are still some older taxa with unclear status remaining in the checklist such as Pieris balcana & other taxa in the P. napi complex or Erebia sthennyo (see for example). On the other side of the discussion the last few years saw lots of new research arise discovering more cryptic diversity in European butterflies but in lots of cases the exact relationships between genetic lineages still have to be unentangled. So when time's ready, be prepared for more taxonomical finetuning of European butterfly fauna 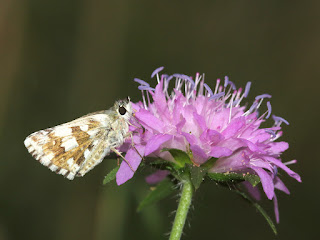 Posted by Pieter Vantieghem at 17:04